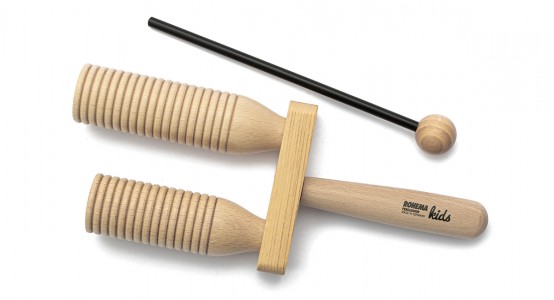 In its original form, the African originated Agogo - an percussion idiophone - consists of two metal bells, which are connected by a bracket.

The Rohema Agogo, on the other hand, is made of beech wood, which we source from local forests. Two tubular hollow bodies of different lengths are connected by a piece of wood, to which a handle is attached. Children (and of course adults) hold the instrument by the handle and tap with the mallet onto the sounding bodies to produce their respective tones.

In addition, the lower part of the mallet can be run over the notches on the surface of the sounding bodies to produce a scraping sound. This two-piece scraping tube drum awakens early childhood curiosity and encourages children to learn and comprehend sound production on their own.