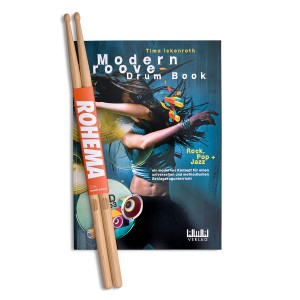 Timo Ickenroth was involved as a musician in band projects of various music genres such as jazz, funk, rock/pop, soul and others and played with musicians such as Jonny Logan, Silvia Droste or Bart van de Lier and many others. In 2009 he founded his music school New Groove Factory in order to promote young talents through qualified, individual and modern lessons in the field of jazz, rock and pop. At the same time he wrote his first drum book, which is a modern concept for universal and methodical drum lessons dedicated to modern grooves from rock, pop and jazz genres.

This carefully constructed beginner's book, combined with the Rohema Start Stick 7A, accompanies the student from the very first steps. The first two chapters are dedicated to the basic knowledge about the instrument and the musical basics, including the theoretical knowledge of notation. In nine further chapters, the drummer learns everything about song-specific playing such as grooves, fill-ins, techniques and rudiments. Each new technique is briefly introduced with its characteristics as well as the differences between it and any other playing technique being highlighted.

With more advanced concepts, the student is encouraged to learn more. Finger dexterity and coordination are practiced with triplet, sextuplet and 3 vs. 2 exercises. The chapters are structured in small steps and contain a lot of practice and playing material, which is completed by an mp3-CD with almost all sound examples of the first five chapters. The playing material is repeatedly loosened up by photos and blank staves, in which the student can enter his own ideas, thus training his creativity, coordination and rhythmic security and versatility. The book ends with a chapter on orchestrating reading exercises, which gives the drummer the opportunity to distribute notes of a groove among the instruments of the drum set and thus actively implement what has been learned so far and create his own sound combinations.

In the appendix there is a list of recommended reading sorted by topics such as technique, grooves & styles in rock, pop and other music genres, swing/jazz, double bass drumming, play-alongs and broom playing. With countless exercises, this school is an indispensable book that the drummer can spend a long time with and use as a reference book on specific rhythms.